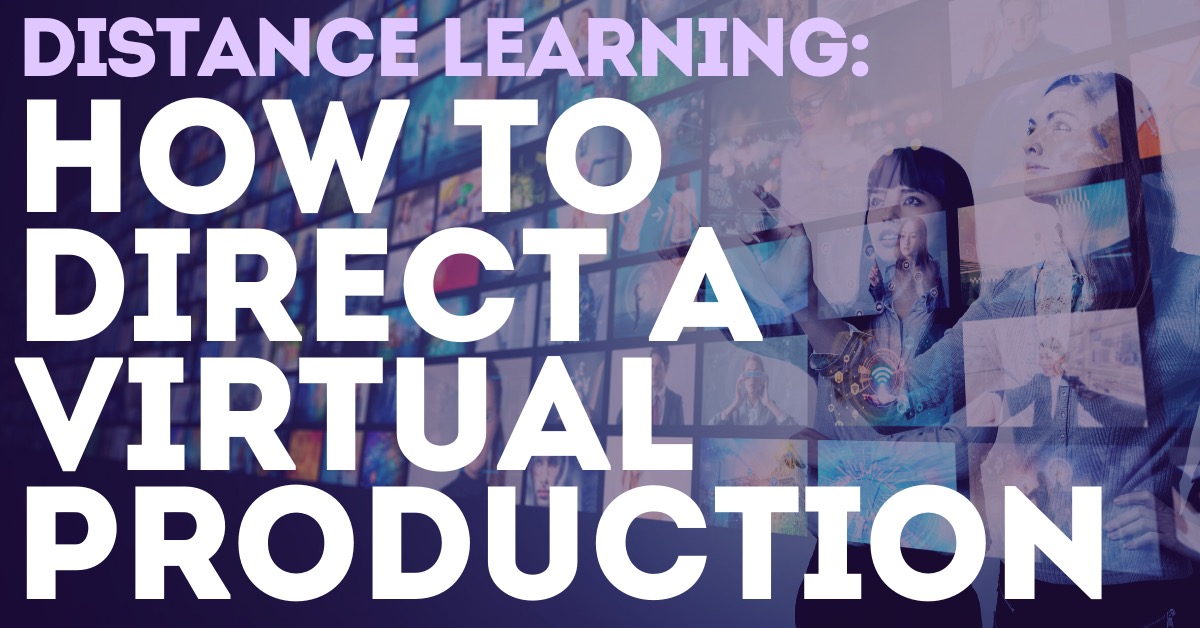 Even though we’re cooped up inside our homes and away from our collaborators, the desire to create theater hasn’t evaporated. People still need connection and stories still need to be told. The question is: How?

If you had asked me 2 months ago if I thought directing a live play on video conferencing platforms Zoom was a good idea, I would have laughed and run the other way. But after some practice, you can actually mimic the rehearsal process, “live edit” your cast into orderly scenes, and ultimately present a clear and compelling story to your audience.

I highly doubt the computer programmers were thinking about how theater people might use apps like Zoom or FaceTime when they created those platforms, but there are some easy work arounds that will give you a surprising amount of flexibility. You just have to start thinking like a film director.

Think of each of your actors’ video feeds as an individual “shot.”

It's okay if you've never had to think like a film director before. I'm going to break each of these "shots" down into three easy steps: 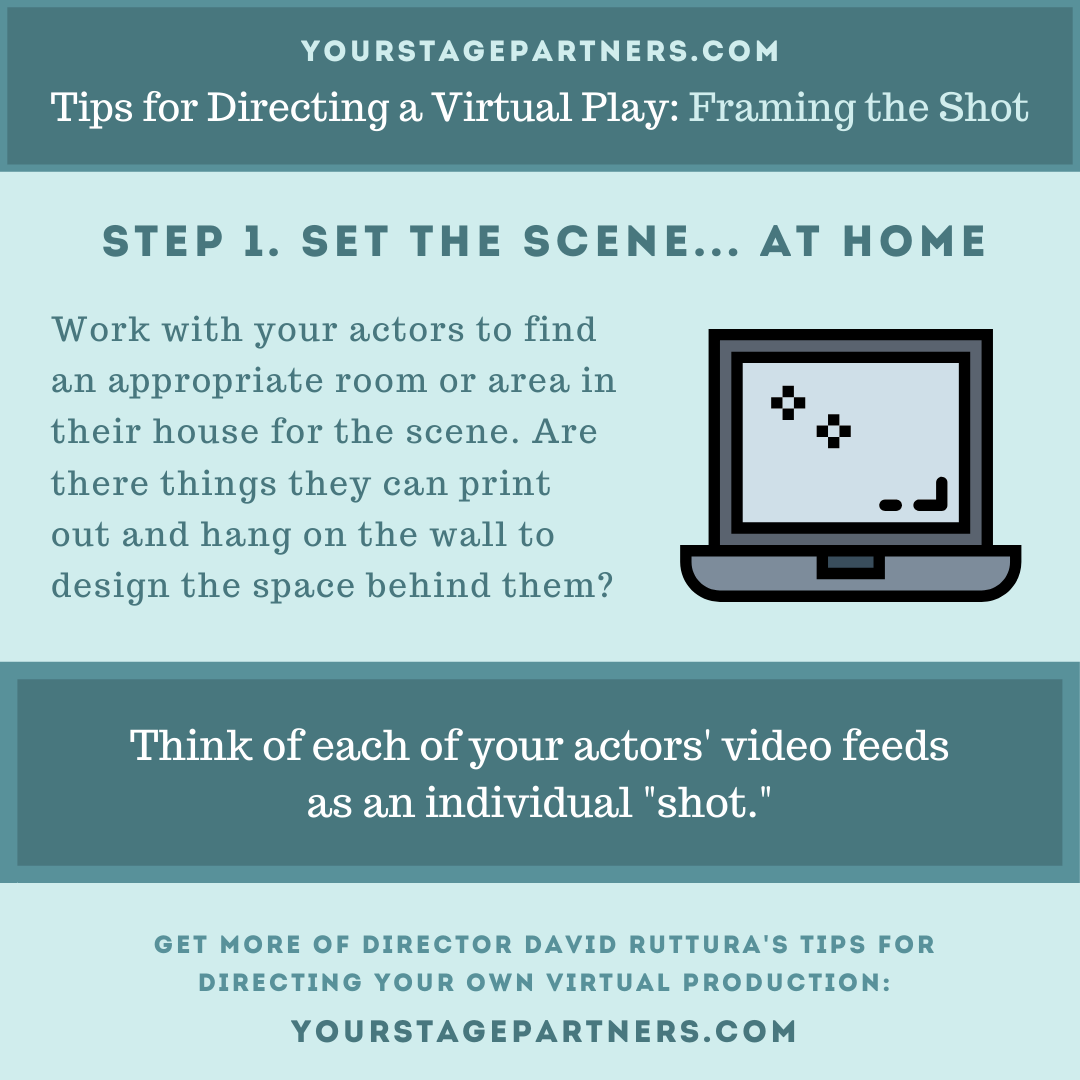 Work with your actors to find an appropriate room or area in their house for the scene.

Is there a way to make it look like two actors are in the same room? Are there things they can print out and hang on the wall to design the space behind them? Any furniture items that will help discern the location?

And don’t forget about costumes! Color and style can do a tremendous amount to tell story— even if you’re only seeing a person’s head and shoulders. 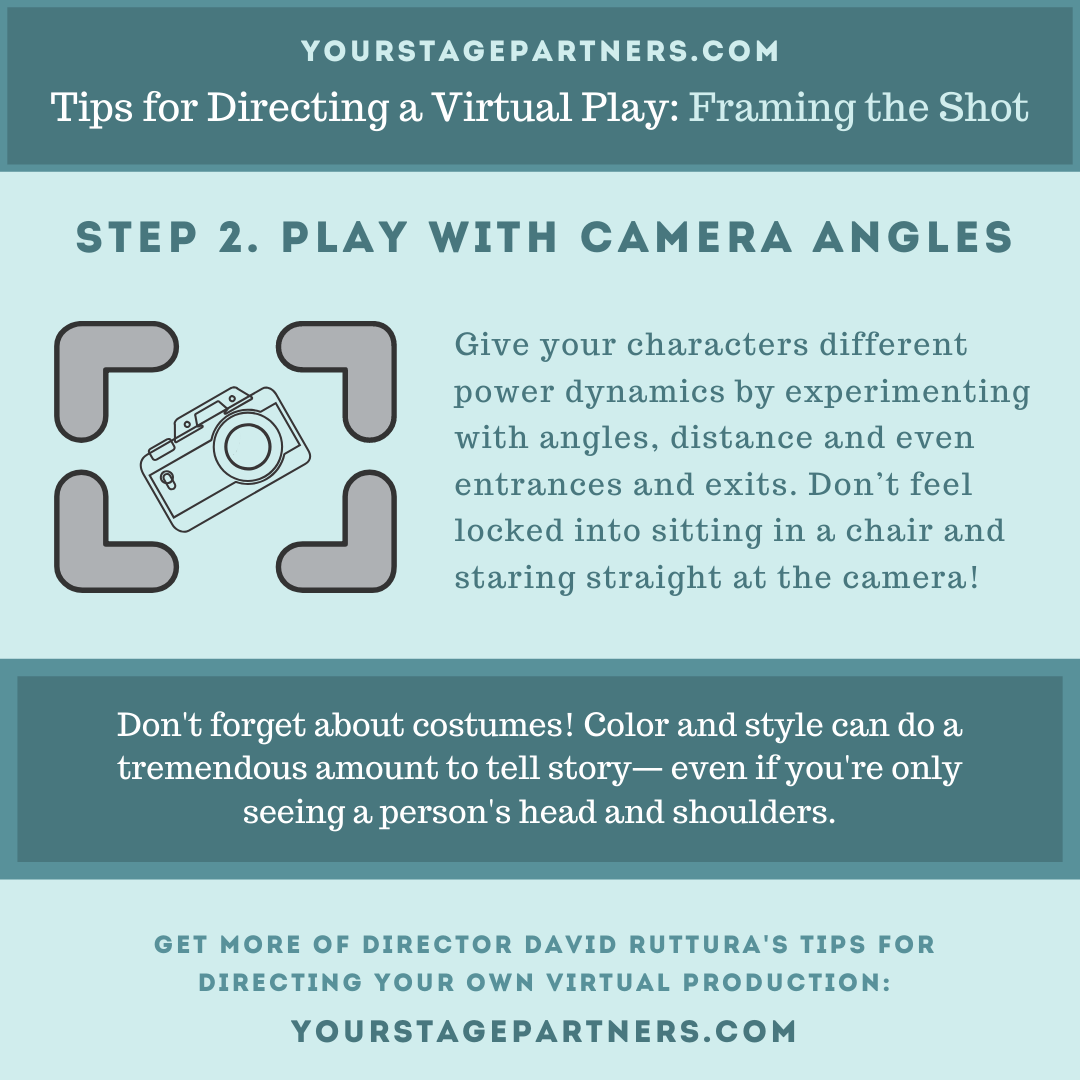 What do different camera angles look like? Is there a particular angle that can tell us something about the character’s mood? Her status? Does having an actor walk around the space on a cell phone, rather than a static laptop, help tell the story?

Actors can also walk in and out of frame, fall out of chairs or stand up in frame. Don’t feel locked into sitting in a chair and staring straight at the camera. Have fun and experiment! 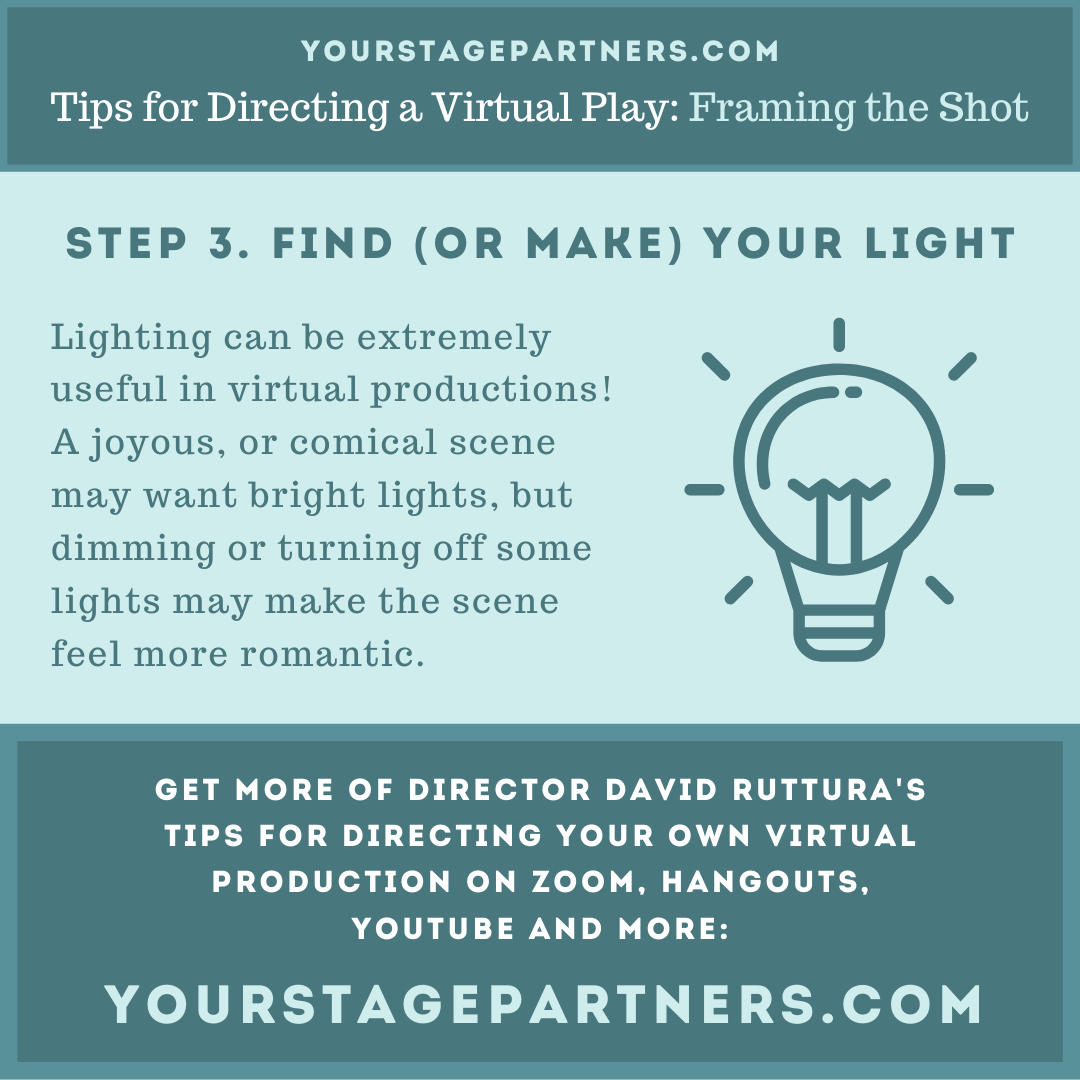 Lighting can be extremely useful in a virtual production. You might start by focusing on making sure your actor can be clearly seen by avoiding common mistakes like lighting them from behind, but there's so much more light can do  to change the mood of the frame— or the whole production!

A joyous, or comical scene may want bright lights, but dimming or turning off some lights may make the scene feel more romantic. Placing a lamp on the floor in front of the actor will make the shot murky and sinister. You can also change the color of the frame, if the actor has an LED light or certain "smart" bulbs. The possibilities are endless.

Before you get into rehearsals, you’re going to want to familiarize yourself with the features in your video conferencing app that you’re going to use to “Live Edit” the performance.

I'm going to focus on the terminology used in Zoom, but many of these features are available in other popular video chat apps from Microsoft, Google, Facebook and others. (Here's a guide to popular Zoom alternatives if you need it!)

Q: Why use a "webinar" anyway?
A: Because it's SO much more than a meeting!

In Zoom, the Webinar feature separates “Panelists” (your actors) from “Attendees” (your audience). It also allows the “Host” (you) to control what the audience (the attendees) see so you can “Live Edit” your actors’ screens over the course of the performance.

It’s basically a virtual proscenium arch separating the Panelists from the Attendees. You control what shows up on the Panelist side of the arch, and therefore you're in control of what the attendees see.

GALLERY MODE
This mode allows you to see all of your actors who have their cameras turned on. It’s great for 2 or 3 person scenes, but it gets confusing to know who’s talking the more people you have on at once.

SPEAKER MODE
Shows only the camera of the person who’s speaking – essentially a “close-up” shot. This is great because it will automatically switch between characters whenever they are talking, which can work for scenes where characters speak at length, but if the dialogue is snappy, it can be tiresome to watch.

SPOTLIGHT MODE
This locks the camera of a single person of your choosing in place, so they’re all you can see – even if another person is talking. It’s great to clock reactions, or hold on someone who dominates a scene.

MASTERING THE MODES: AN EXAMPLE

As you rehearse, you’re going to find that you want to be in Speaker Mode for a certain actor for that big monologue in Scene 2. Then Gallery Mode so you can see everyone’s face for that crazy dinner scene, but the Spotlight to capture some of the great reactions as the scene flies by.

You’re going to be clicking and toggling around all night— that’s great! You should be. Just make sure to keep a call script for yourself and note where you want each “shot” to shift and which mode you want to be in for which character.

The best part? Unlike blocking you can keep playing around up to and even during the performance!

Just like in the theater, the actors are in control of their entrances and exits. They should switch their cameras on to enter and switch them off to exit.

IMPORTANT: Whenever they are “off-stage” they need to mute their microphones!

If you’re feeling technologically savvy, you can create videos in free software like iMovie that have music and play them for scene transitions during the show. Once this button is clicked, that computer screen takes over and the audience can see and hear whatever is playing.

Looking for more suggestions on free video editing software and other apps you can use for virtual productions? Check out this blog post from Stage Partners Education Director Maria McConville! 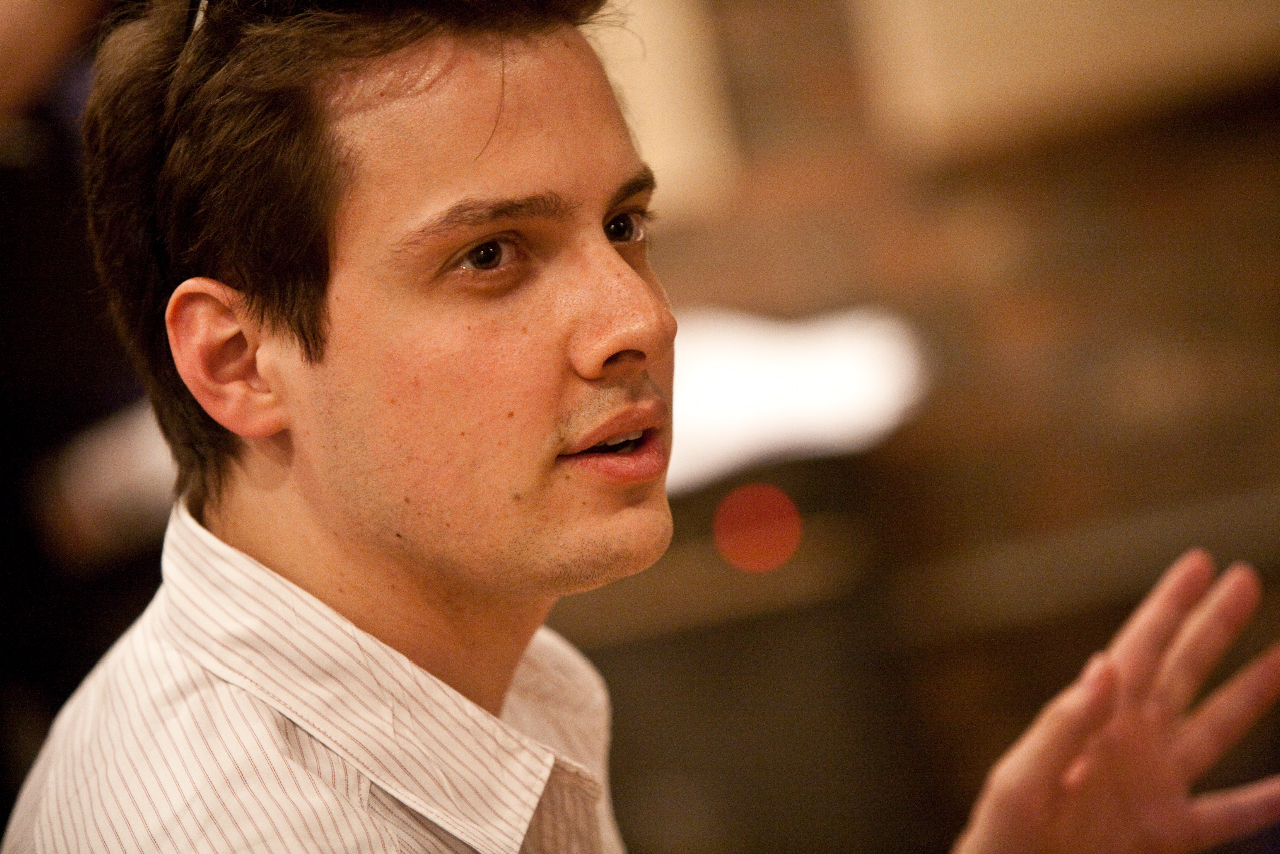 This is mind-bogglingly similar to a normal process, you’re just not all in the same room… here are some thoughts, but you should do whatever works for you and your actors.

READ-THROUGH & EARLY REHEARSALS
Invite all of your actors to a Zoom “Meeting.” Ask everyone to be in Gallery Mode, read through and discuss, same as if you were sitting around the table, like the good old days!

You can play around with camera angles and start talking about costumes, props and decorating the “set.” But most importantly, direct your actors as you normally would— any semblance of normalcy in this times is so welcome!

You should also start “Live Editing” during these rehearsals to get a sense of how you want the scene to look, and how each mode (Gallery, Speaker, Spotlight) can affect the storytelling.

RUN THROUGHS
This where you’re going to want to really lock down your shots and get used to clicking around between them… and still pay attention and not the performances… phew!

PERFORMANCES
Schedule your Webinar, get the link from Zoom (or your Webinar platform of choice), send out invites and you’re good to go! Call your actors a half hour early, make sure to make them all Panelists, wait for the audience to get their butts in their virtual seats and then… Cue 1 GO!

David Ruttura is currently the Associate Director of Beautiful on Tour. As an Associate Director, David has worked on the Broadway productions of Network, School Of Rock, Spider-man, Follies, Lombardi, Million Dollar Quartet, White Christmas and A Man for All Seasons. He has directed productions for Norwegian Cruise Line, Westside Theatre, Gateway Playhouse, Pittsburgh CLO, Ogunquit Playhouse, Araca Project and Ars Nova. He has toured Phantom and his regional credits include work at the Kennedy Center, LaJolla Playhouse, and Old Jews Telling Jokes. 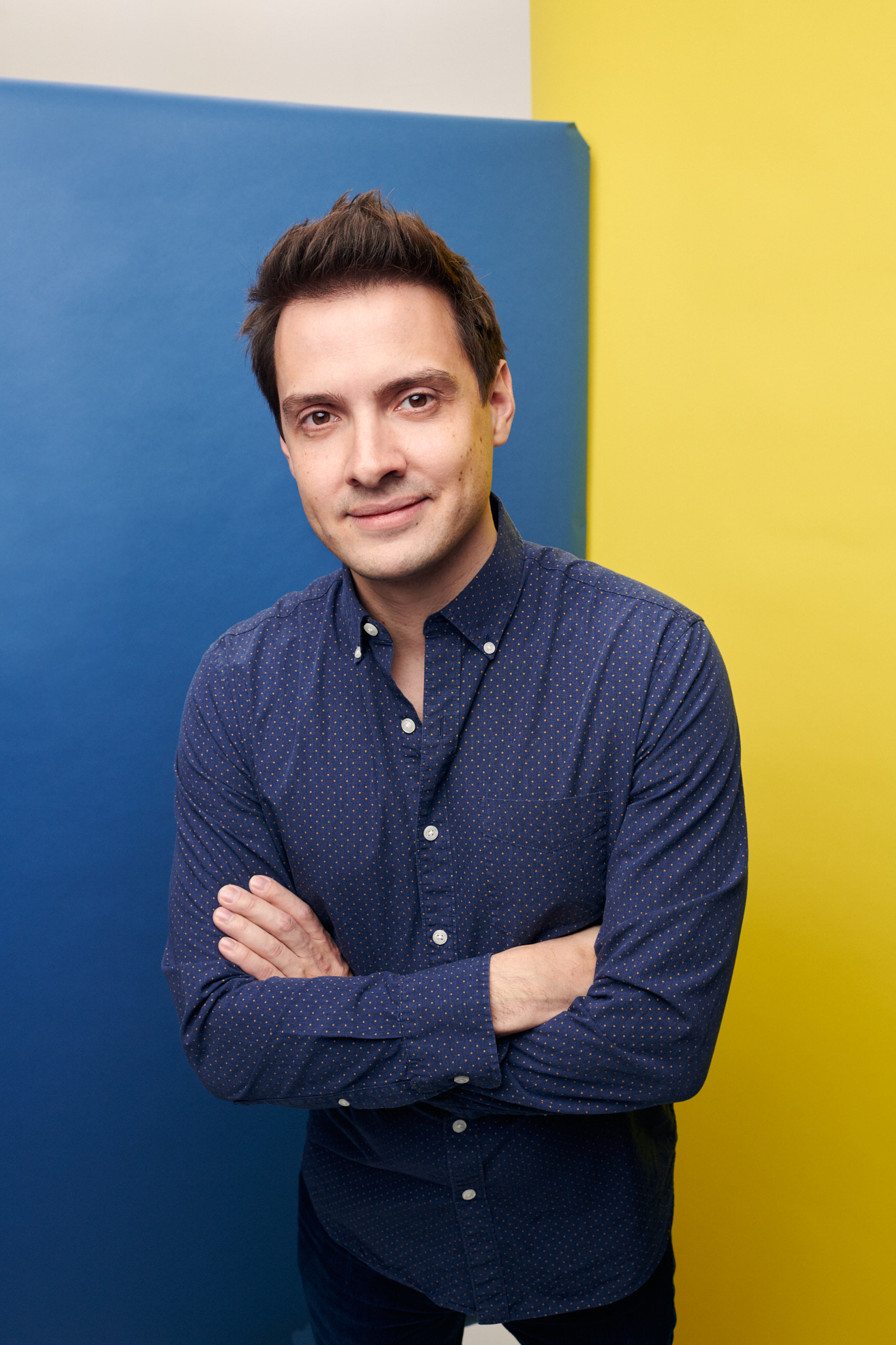