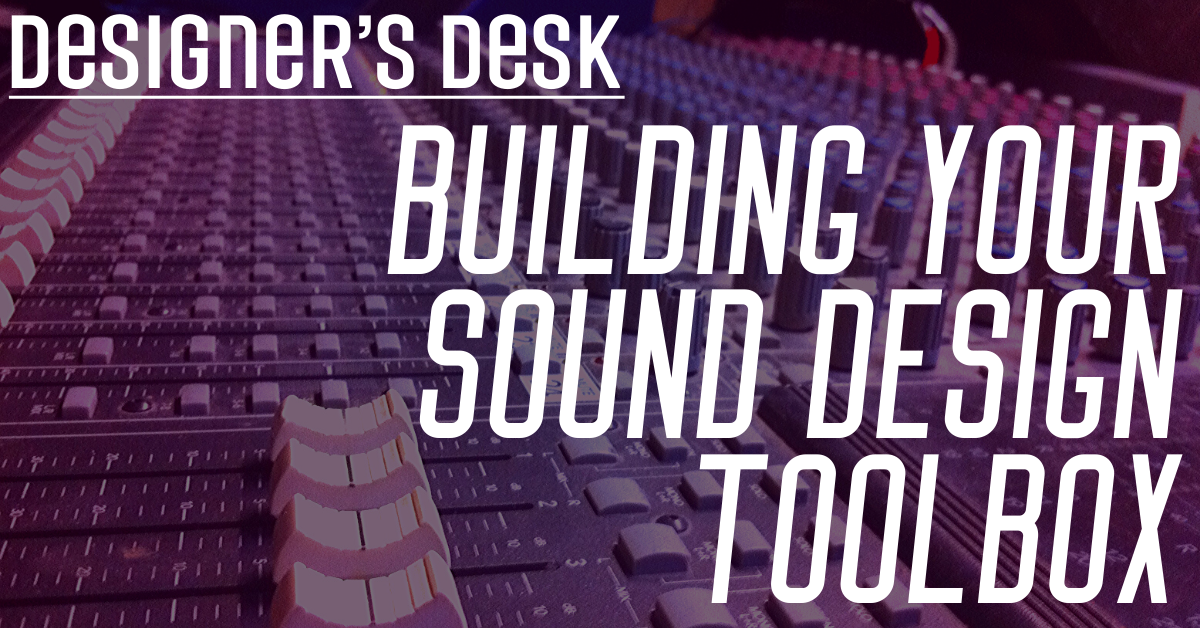 You and your student actors have been hard at work and now after weeks of rehearsals on the big school play it’s almost time for everything to come together in tech! You’ve finished all the costume fittings, your set and lights are finally starting to take shape, but you can’t help but feel like you’re forgetting something…

[A CRASHING SOUND FROM OFFSTAGE.]

And that's when you realize you forgot… THE SOUND DESIGN!

Thankfully you bookmarked this blog post and now I'm here to rescue you! 😉

With no visual element, sound is often the unsung hero of design: When it works perfectly it often goes unnoticed, subtly elevating the entire production. But as both a playwright and a professional sound designer I know how a poorly-executed (or eerily absent) sound design can ruin the magic of even the best shows.

I also know that sound design can take many shapes and forms: It can be big and bold or strategically deployed in a few key moments. I once spent two weeks sitting through previews of an Off-Broadway show with exactly two sound cues. But, oh! Those two cues! They set the tone for the whole show.

So don't worry: Even though sound design can be hard to explain, it doesn't have to be scary!

In this edition of our Designer’s Desk series I’m going to demystify sound design and help you build your own Sound Design Toolbox. With these tools (and apps!) you can focus on the fun part: Using sound to help tell amazing stories onstage with your student actors. We'll start with recording sounds, then we'll do some quick editing, and finally we'll talk about how to perfectly time those cues with the help of your stage manager and a little bit of technology.

Step One: Get Your Sounds

Record your sounds and/or find them online through directories like freesound.org.

Edit your sounds so they start sharp and end appropriately using free software like GarageBand or Audacity.

Step Three: Cue Them Up

Use free cuing software like QLab to perfectly time your sound cues. You can even practice in the rehearsal room.

First thing's first: Let's get some tools for our toolbox! Whether you use a Mac or a PC, you probably already have access to everything you need.

GarageBand is a free audio editor that comes on every Mac. It's designed for music composition, but it's also the easiest way to record audio into your Mac. Click here for more tips on getting started in GarageBand.

Audacity is a free audio editor available for both PC and Mac. It has a simple interface and plenty of online documentation to back it up. The interface isn't as intuitive though, so get ready for a little learning curve.

QLab is the industry standard for sound cuing for theater, but its core features are available for free! Use it to perfectly time and execute your sound cues or upgrade to a pro license to control video and more.

Step 1: Get Your Sounds

Before grabbing a bunch of equipment stop and ask yourself: What kind of sound do you need?

If you're recording voice overs or other text then you're probably best off using a computer. Any Mac or PC has microphones built into it, but you can improve the sound quality by using a dedicate microphone. Amazon has a wide selection of inexpensive USB microphones (I prefer the Blue Snowball, personally) but you can also get a small boost using the microphone built-in to many modern earbuds/headphones (wired, not wireless!). Those little microphones aren't studio quality, but they're designed to capture voice so they tend to work fine for voice overs.

Most USB microphones are plug-and-play with apps like Audacity and GarageBand, but keep in mind they almost definitely won't be able to connect directly to old fashioned ("analog") sound systems or mixing boards.

A microphone might be more than you need, though. The most important thing is recording in a quiet environment and making sure you capture a strong sound wave (more on that below).

In fact in some situations your phone might be the best tool for the job: If you need sound effects out in the real world (say, the sizzling of butter on a pan) you can use your phone's voice memos app (iPhones come with one and there are plenty of great free options for Android). It might take some trial and error to figure out how best to position your phone while recording, but you can figure it out in no time once you learn how to ride the sound wave... 🏄‍♂️

How To Ride a Sound Wave:

Not sure how loud is too loud when you're recording sounds or voice overs? Watch the sound waves! Ideally the sound waves are nice and big, but with enough "headroom" (extra space) that none of the waves are "clipping" (hitting the top/bottom of the meter).

In the pictures below you can see three classic examples:

🤔 What if you can't record the sound you need?

Looking for a dragon's roar but not sure where to go in your neighborhood to record one? Or maybe that sci-fi deep-space shootout needs an explosion bigger than the one you can make in your microwave. It's happened to the best of us!

Thankfully schools and student theater productions can still have big budget sound effects thanks to the community at freesound.org. The website offers a searchable database of completely free sound effects created by designers all over the world. I've used them countless times, especially in rehearsal.

What do you need to do? Trim it? Clip it? Fade it?

Now that you've captured that sound effect or voice over you probably need to clean it up a little. Free apps like GarageBand (Mac) and Audacity (PC or Mac) make it easy to import your audio (you might've even used them to record the audio to begin with!). Once it's there, you can trim (cut) anything you don't want to keep in the final sound cue. For timing it's best to have your cues start sharply with little-to-no silence before the sound begins. Likewise, you'll usually want to make sure the sound effect ends on time. This is also you chance to play with the EQ, Reverb, Echo, and other professional effects. Need to make a voice sound like a robot? There's always a setting for that, too!

When you're done editing it's time to export, so let's do a quick recap of the common audio formats.

You might already be well-acquainted with mp3s, but that's for a good reason: This file type still balances size and quality reasonably well. But if you're exporting from an app like GarageBand be sure to choose a higher quality setting.

.m4a is like .mp3s younger cousin and mainly pops up on Apple Products. If your show's sound is being run off a Mac (using QLab, for example) then you'll be fine with these files as-is.

It's worth noting that music or sounds from streaming services like Spotify can't be exported from those apps and won't work in cuing software like QLab.

These are uncompressed formats that take up more space but provide the greatest audio quality. Professionals tend to work in these formats, but they can waste tons of space on your computer and/or phone and are often overkill depending on the quality of the recording.

For school theater and student productions I recommend a high quality mp3, unless you have a dedicated show computer to hold these big uncompressed files.

Step 3: Cue Up Your Sounds

This is where tech time and your trusty stage manager come into play.

If you're using a Mac I recommend cuing up your sounds using a free app called QLab. It's the industry standard for cuing sound, and can even cue lights and projections too (although those features cost extra). I've used it in educational theater environments for over a decade, and seen it behind the sound board at professional Broadway productions. The learning curve is pretty short, and student designers or stage managers can pick it up in no time (you, too!). The benefit is perfectly time cues every time: All your stage manager has to do is press GO (or the space bar) and the next cue starts, stops, and fades in or out. This also makes working with sound in the rehearsal room a breeze, because you can reset and start over easily every time.

If QLab doesn't sound right for you consider cuing up your files in a playlist in iTunes. If you do it that way take my advice and make each "cue" a separate playlist, then organize them all in a Playlist Folder (you can organize them by numbering your cues!). That way your cues will play, then stop without accidentally continuing to the next sound or song! (Even professionals have to use iTunes sometimes. 😉)

By now you should have all the tools you need to make it through tech, but this is just the beginning of your journey as a sound designer is just beginning. Tweet me your questions at the @stage_partners twitter account with the hashtag #DesignersCorner and I'll answer your questions!

Chris Barlow is a professional sound designer and the author of iFeel, School of Sharks, and other plays. He designed the original production of dozens of plays in and around New York City, including Hand To God, and worked as an assistant at The Roundabout, Second Stage, and other Off-Broadway theaters. He currently lives in Manhattan with his dog and several other animals.

📱 You can send Chris your sound design questions by tweeting them to @stage_partners! 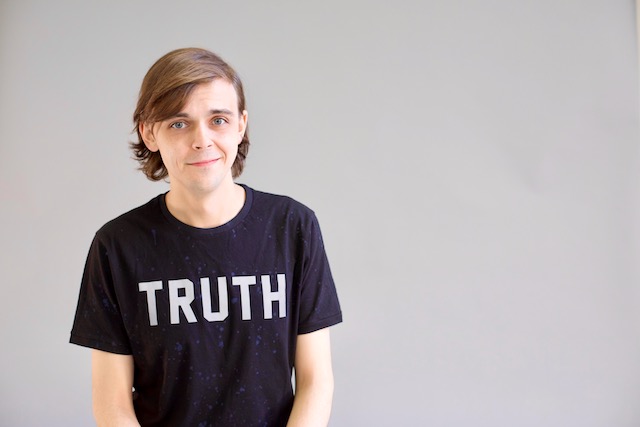 Looking for even more plays for young actors?

Check out all our plays for schools and young actors here!