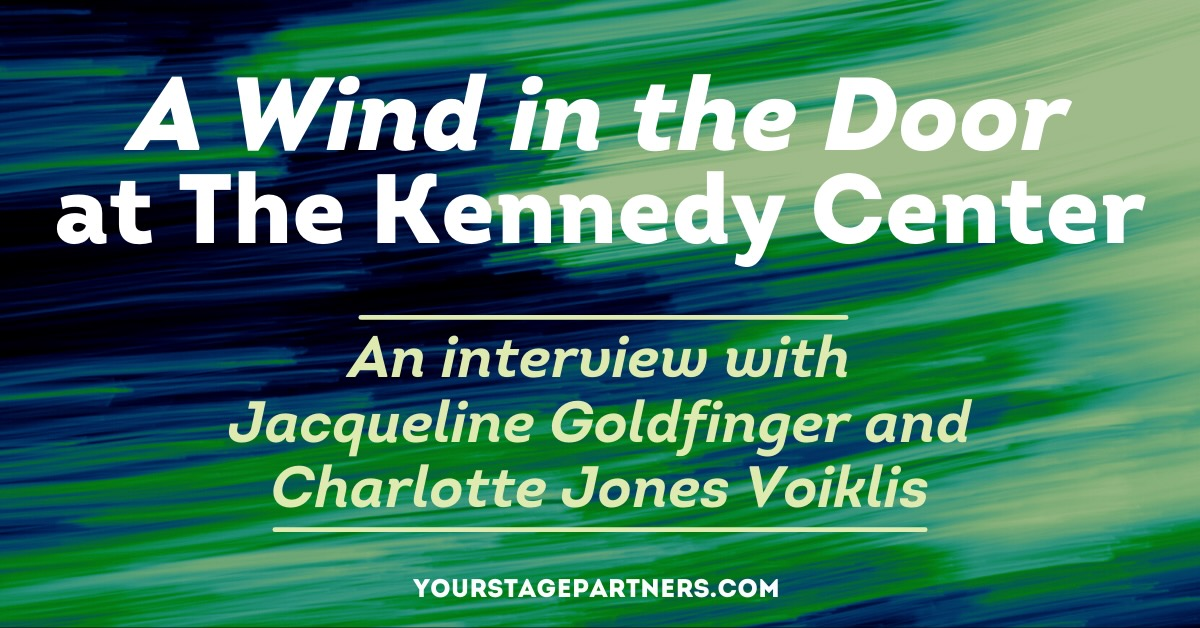 A Wind in the Door heroine Meg Murry embarks on an adventure when she learns of a powerful connection between her little brother and the fate of the universe. On our journey to Washington, DC for the premiere of the new stage adaptation of A Wind in the Door, it was clear that some powerful connections had sent us on our adventure, too. All of us at Stage Partners have a strong bond with the work of Madeleine L’Engle: sprawling and intimate, poignant and humorous, her writing is beloved and a new adaptation of her work always gets us excited. You can only imagine our delight when we found out this adaptation would connect dynamic playwright Jacqueline Goldfinger with a development process and premiere at the Kennedy Center. As the first in-person performance at the venue since the pandemic began, there was a new awareness of the special connection live theater can offer, even as the Kennedy Center’s online stream offered another avenue for the play to connect with audiences.

We were fortunate enough to spend time with playwright Jacqueline Goldfinger and Madeleine L’Engle’s granddaughter, Charlotte Jones Voiklis at the Kennedy Center. Here is some of our chat... 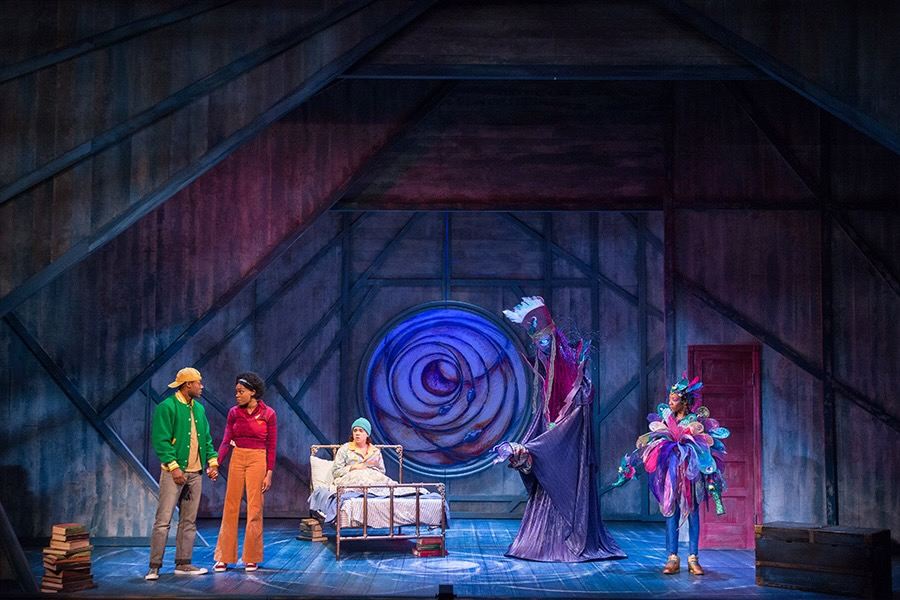 MARIA MCCONVILLE: At what point in your life were you introduced to the work of Madeleine L'Engle? What sort of impact did her writing make on you?

JACQUELINE GOLDFINGER: I always loved adventure stories. When I was in Fifth Grade (age 10), a teacher lent me her copy of A Wrinkle in Time. I was immediately drawn into the story and fell in love with the characters - I was totally a Meg. I read the entire book in one night; even after my parents put me to bed, I snuck into the bathroom to turn on the light and read where they couldn't see me. I probably read the book every night for a week until my teacher asked for it back. I then went on to read both the Time Quintet and all of her other books. (I'm also a Polly, but that was in my teens.)

They have had an enormous impact on my life. I loved adventure stories but I was also interested in stories that asked big questions and shared new-to-me points of view. At that age, most books tend to be either action-packed or thought-provoking. L’Engle’s books are both. When I began writing plays, I asked myself, how can I do that? How can I entertain and engage while also introducing big ideas into my work? 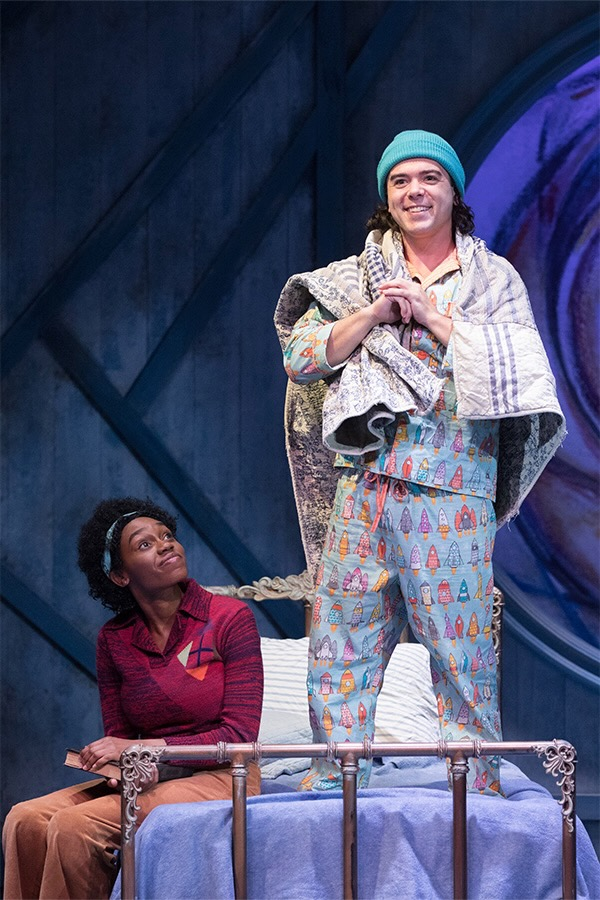 Alicia Grace and David Landstrom in A Wind in the Door, The Kennedy Center (2021). Photo by Teresa Wood

MM: What is it about A Wind in the Door that you connect to the most?

CHARLOTTE JONES VOIKLIS: I think it's the relativity of size. If we understand that, then we are freed from the crippling thoughts that what we have to contribute isn't enough. 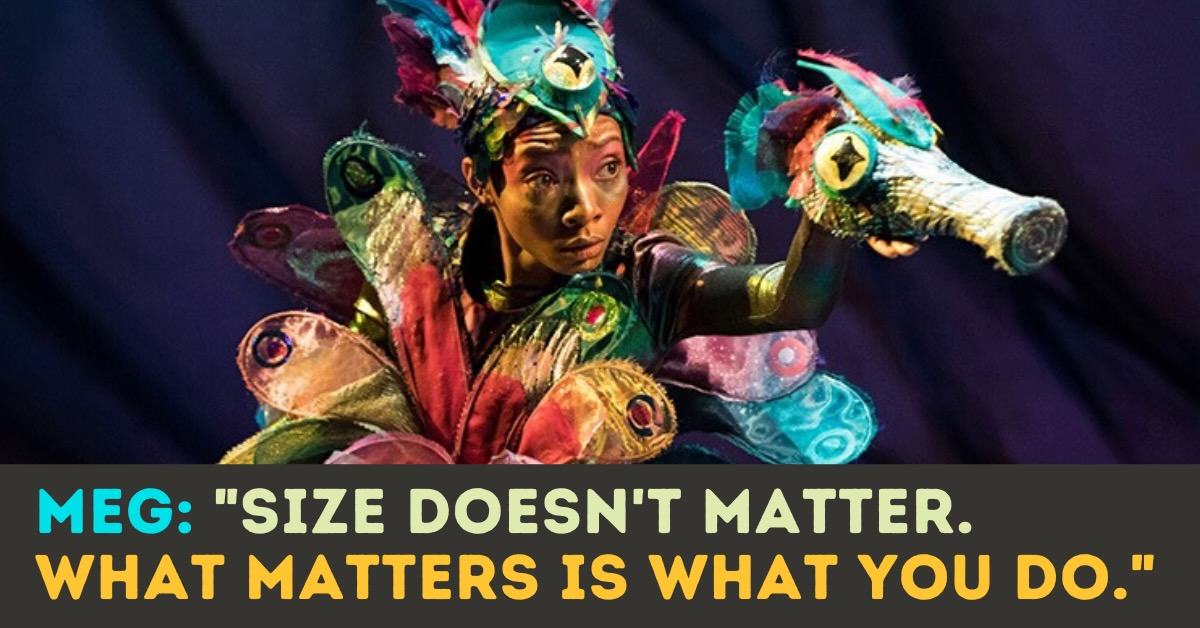 Tyasia Velines in A Wind in the Door, The Kennedy Center (2021). Photo by Teresa Wood

MM: Jacqueline, when you read A Wind in the Door, knowing you were going to adapt it, what were you aiming to capture from the book with your adaptation for the stage?

JG: Since the book is so beautifully dense and complex, I knew that I was not going to be able to include every nuance in the stage version. So, I aimed to capture, what I felt, was the heart, soul, and main message of the book.

MM: Charlotte, what is it about this theatrical adaptation that you think audiences will connect with?

CJV: I think audiences will connect with how we're all, well, connected! I also think they'll be captivated by the costumes and humor.

MM: Jacqueline, what was your favorite part about developing the play with Artists at The Kennedy Center?

JG: The Kennedy Center is a fantastic place to work. Their mission is very much "Art for All" which I also believe, and their values are both spoken and in-practice in every rehearsal room. There is a rigorous respect for the work, and acts of collaboration, questioning, and reflection are highly prized. I would work there on any project, but it was extraordinarily special to work on an L'Engle piece at The Kennedy Center because their values are very much in sync. It was a joyful collaboration that, I think, everyone was both invigorated by and enjoyed.

MM: The Kennedy Center is a particular and special institution in our nation. What is the significance of this play debuting at this arts center?

CJV: It's a very special thing to have this play debut at the Kennedy Center after this particular 18-month pause of theater and communal artistic experience. Being present at the premiere was a powerful reminder of what theater gives us, and this particular story about how we're all connected added to the poignancy. 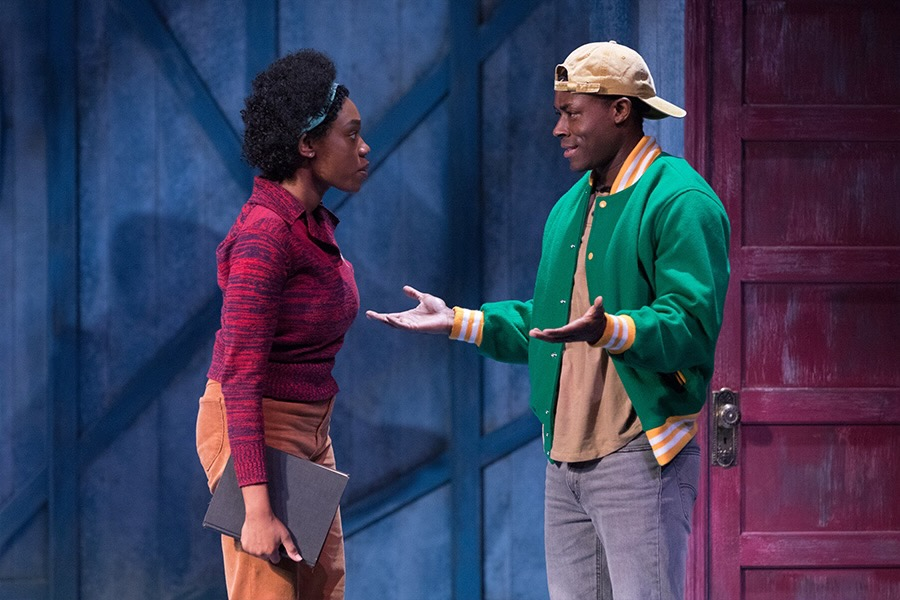 Alicia Grace and Vaughn Ryan Midder in A Wind in the Door, The Kennedy Center (2021). Photo by Teresa Wood

MM: Charlotte, how do you think your Grandmother would have enjoyed this modern take on her beloved book?

CJV: She loved the theater and it was important to her that her books continued to be adapted and shared with audiences. She understood adaptation as its own creative project and I think she would be delighted with A Wind in the Door. 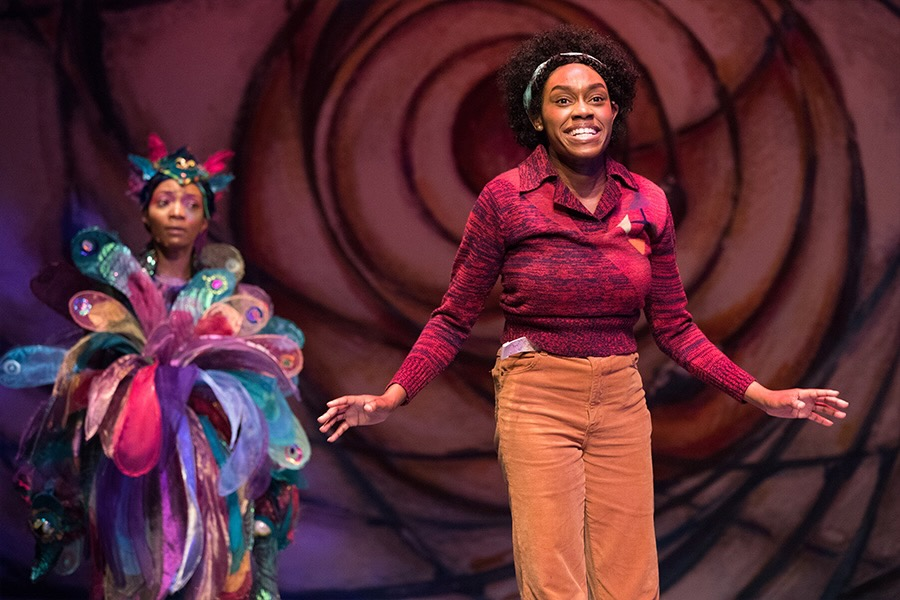 Tyasia Velines and Alicia Grace in A Wind in the Door, The Kennedy Center (2021). Photo by Teresa Wood

MM: Why is it important for young audiences and young performers to engage with this story right now?

JG: During the height of COVID our lives contracted, and the communities that we lived and worked in were much smaller than usual. Now, in early post-COVID times, our communities are expanding exponentially, and I think it's a great moment to revisit ideas of caretaking for the larger communities we belong to - local, national, and global.

One of the reasons that this book remains a classic is that it explores issues that humanity will contend with until the end of time. How do you care for your community and yourself at the same time? What is our responsibility to the planet? How can we stay connected but also find the time we need to think for ourselves? These themes will always be relevant as long as humanity exists. 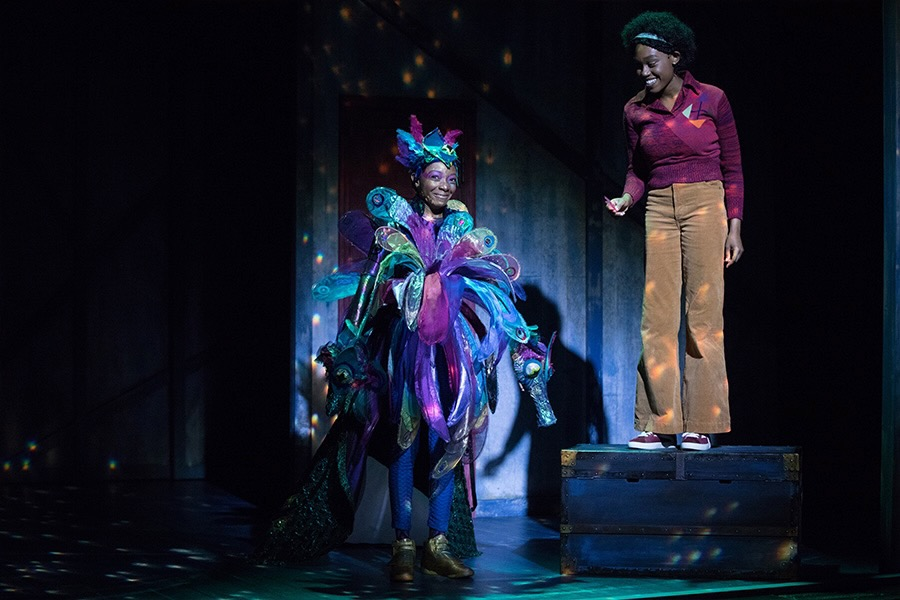 Tyasia Velines and Alicia Grace in A Wind in the Door, The Kennedy Center (2021). Photo by Teresa Wood

Jacqueline Goldfinger is an Affiliated Artist at New Georges, National New Play Network, Lark Playwrights Center, and BMI Bookwriting Workshop. She won the Yale Drama Prize, Smith Prize, Generations Award, Brown Martin Award, Barrymore Award, and OPERA America Discovery Award (with Composer Melissa Dunphy). Her plays have been on The Kilroy’s List. She’s been a Finalist for the LAMBDA Literary Award, Beth Henley Award, Woodward-Newman Award, and received a Special Citation from the Terrence McNally Award. Her theatrical works have been produced at the Kennedy Center for the Performing Arts, BBC 3 Radio (UK), Contemporary American Theatre Festival, Voces8 (UK), Gate Theatre (New Zealand), Oberlin Opera, St. Martin in the Fields (UK), Decameron Opera Coalition, Hangar Theatre, Theatre Exile, Resonance Works, Amuse Singers, NYC International Fringe, and others. Her work has been developed at The National Theater (UK), McCarter Theatre, Disquiet (Portugal), Wilma Theatre, New Georges, and others. Her work has been supported by YADDO, National Endowment for the Arts, Millay Colony, The Orchard Project, Drama League, Granada Artist Residency, Independence Foundation Fellowship in the Arts, among others. Her work is published by Routledge, Yale Press, Edition Peters, Concord Theatricals (formerly Samuel French), and others. In 2019, she was awarded a Special Citation for Teaching and Mentoring by LMDA. In 2021, her book Playwriting with Purpose: A Guide and Workbook for New Playwrights was published by Routledge. In 2022, her new book, Writing Adaptations and Translations for the Stage, co-authored by Allison Horsley will be released by Routledge. For more information: www.jacquelinegoldfinger.com 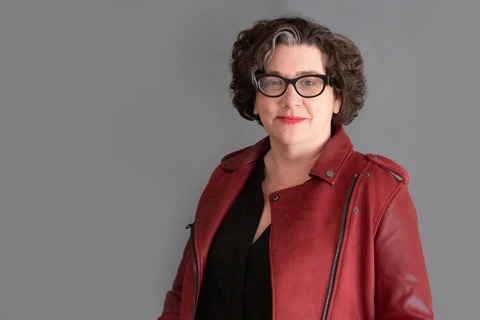 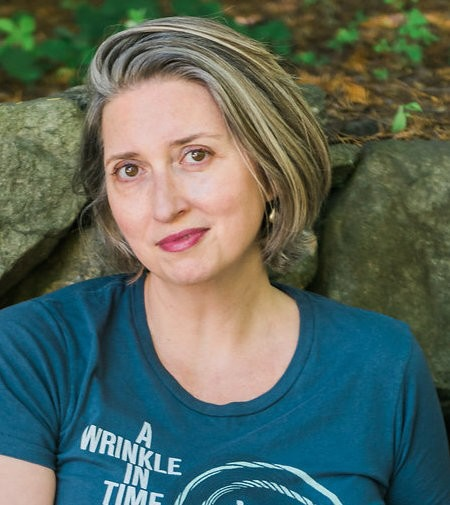 Charlotte Jones Voiklis is Madeleine L’Engle’s granddaughter and executor of her estate. She is the co-author with Jennifer Adams of A Book, Too, Can Be a Star (October 2022), a picture book biography illustrated by Adelina Lirius; and, with her sister, Léna Roy, of Becoming Madeleine (2018), a biography for middle grade readers. She wrote the afterword to the 50th Anniversary edition of A Wrinkle in Time, and the introduction to The Moment of Tenderness (2020), a collection of short stories. Charlotte has also written and spoken of her grandmother’s work to a variety of audiences. With a PhD in Comparative Literature, Charlotte’s work experience includes teaching, fundraising, communications, and grant making. She has been a volunteer mediator in the New York City court system. Charlotte lives in New York and Connecticut with her husband and has two grown children.

A Wind in the Door

Adapted for the stage by Jacqueline Goldfinger

One of literature’s favorite heroines, Meg Murry, the fierce and fiery heroine of Madeleine L’Engle’s classic novel A Wrinkle in Time, is back to join forces with her brother Charles Wallace and friend Calvin for a fantastical adventure. When an extraterrestrial creature recruits the trio to fight an evil force, they’ll travel across a galaxy—and through the cells of a human body—to stop it. This thrilling sci-fi story reveals that love and kindness are the best antidotes to evil.

This theatrical re-telling with vivid visuals, puppetry, and creatively suggested imaginary locations is perfect for professional theaters that can maximize the opportunities for puppetry, or even for small touring groups who need to tell the story with less performers (5), or with puppetry and props (that are able to travel). 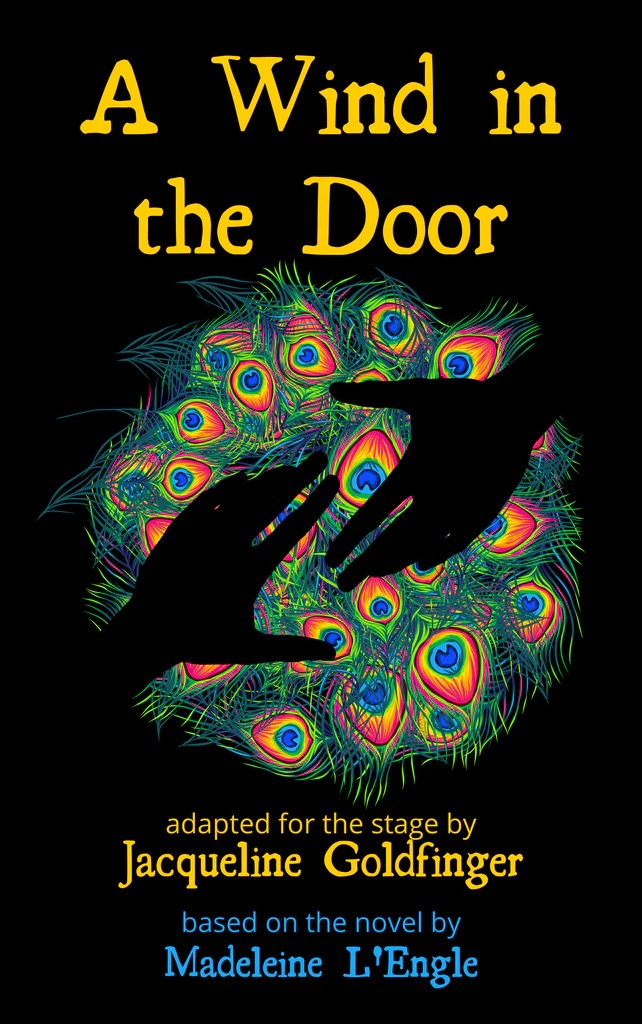 Explore our adaptations of A Wrinkle in Time here.

Find Peter J. Royston’s adaptation of A Wind in the Door here.

Find Jason Pizzarello’s adaptation of The 24 Days Before Christmas here.

Want to stay up-to-date on the latest plays from Stage Partners?